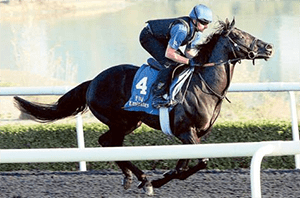 Multiple group-winner and 2015 Melbourne Cup hopeful Cavalryman has been euthanised after suffering a serious leg injury in the Group 3 Nad Al Sheba Trophy at Meydan.

The 2012 Melbourne Cup entrant (12th) failed to finish the race after sustaining a fracture to its hind off leg.

“He was a real character in the yard and was treasured, not only by me, but by everyone here – all of the team,” trainer Saeed bin Suroor said.

“We are very upset by the tragic news. He had a wonderful career and will be hugely missed.”

The nine-year-old was originally trained by Andre Fabre in France where it won the Group 1 Grand Prix de Paris and the Group 2 Prix Niel.

It then went to Saeed bin Suroor where it finished 12th to Green Moon in the Melbourne Cup before winning another four group races, most notably the Goodwood Cup and Princess of Wales’s Stakes last year.

Talented three-year-old Swaynesse is also well favoured in the market at $41, whereas 2014 winner Protectionist has drifted out slightly to $10 following a moderate performance at Caulfield last Saturday.