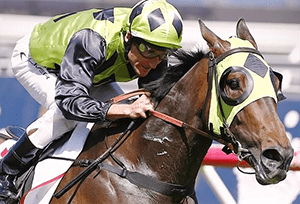 TRAINER John Sadler has warned the public to not overlook his mare in the Group 1 Goodwood Handicap at Morphettville this Saturday.

Vain Queen was sent out as a $4 chance in the Sangster Stakes a fortnight ago at Morphettville, but it finished seventh behind Miracles Of Life and bookmakers are giving the mare no respect this weekend.

The five-year-old by Artie Schiller is currently at $12 with CrownBet.com.au for the Goodwood Handicap, but Sadler thinks punters should respect his runner.

“She had no chance when she went back in the field in the Sangster,” Sadler said.

“She ran home from 14th at the 400 [metres] to finish seventh, but being back there is just not her go.

“She is far better running close to the pace and then unleashing her short but explosive sprint.”

That explosive sprint has seen Vain Queen win races such as the Group 3 G.H Mumm Stakes at Flemington and the All Victorian Handicap, also at Flemington, but its second placing two starts back in the Group 1 William Reid demonstrated what it can do at the top level.

Jockey Nicholas Hall couldn’t find the lead last start and it never had a chance based on its usual racing pattern.

“That race was pretty much a non-event for her,” Sadler added.

Nicholas Hall has since suffered a wrist injury and Sadler has stuck with his apprentice Katelyn Mallyon, telling her to be forward in the running and save it for one last burst.

“She has ridden Vain Queen once for a slashing win down the Flemington straight so the owners were keen to put her on,” Sadler said. “She is in great form.”

Sadler opted to keep Vain Queen in Adelaide where it has done “a fair bit of work at the beach and I’m really happy with her.”

“This, naturally, is a really tough race. It looks like the horse that gets the best run will win.

“You can find chances for so many in the race, but we do seem to be overlooked.”

Current favourites Hucklebuck, Black Heart Bart and Lucky Hussler all appear to be cherry ripe for the Goodwood, but Sadler assures punters Vain Queen is in good order.

“I can assure you she is in really good shape,” he said. “If she gets any luck she will be in it up to her ears.