Danny Beasley tells how he would ride Golden Slipper favourite 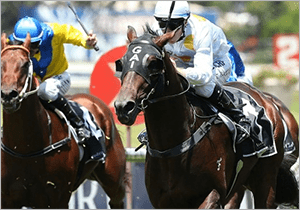 VANCOUVER jockey Tommy Berry will be receiving advice from all parts this week ahead of the 2015 Golden Slipper, but there is one man who he may want to pay closer attention to.

Former jockey Danny Beasley won the 2003 Golden Slipper aboard Polar Express from barrier 14 and he’s giving advice to Berry, who has the unenviable task of riding Vancouver from barrier 15 this year.

Berry has a challenge on his hands riding the $3 favourite for the richest two-year-old race in the world. Beasley gave his thoughts about how the talented jockey should ride the unbeaten colt.

“To me he looks like an Assertive Lad type of horse.”

Typically, Gai Waterhouse-trained runners tend to go forward and Beasley agrees that her horses are better suited in front.

“Gai’s horses don’t really pick-up and sprint, they settle up on fast speeds and keep going.

“Looking at his Randwick win he’s a big strong horse, he’s got speed so you’d be trying to cross and find a spot in the first three or four for sure.”

Vancouver has settled on or close to the pace in all three of its runs, including an effortless win last time out in the Todman Stakes at Randwick.

The same tactics were used by Beasley in his 2003 win as he was able to cross from the wide draw, slot into a premium position before pulling wide around the turn.

“The year Polar Express won, she was fast out of the gates and Exceed And Excel had drawn outside me. He wanted to pull, so I let him go and ended up fourth one out, one back,” Beasley added.

“That was just luck, but looking at him, you can’t go back on a horse like Vancouver. I wouldn’t be going back.”

There are only two runners at single figures odds with the John O’Shea-trained Exosphere sitting at $4.40 with Crownbet.com.au.

“Vancouver and Exosphere are probably similar in ability but the Slipper will be more suitable to Vancouver because Exosphere looks like he’ll have to get back and switch off. He could get caught up in the ruck and will need some luck,” Beasley said.

“You don’t get smooth runs in the Golden Slipper, you have to make your own luck.”

Blake Shinn has been removed from riding First Seal after he was unable to win aboard the filly in the Group 1 Coolmore Classic, finishing second behind Plucky Belle.

Shinn was disappointed to lose the gun ride, but remains confident of his mount for the upcoming Group 1 Vinery Stakes at Rosehill next week.

“It’s the owners decision. I respect that and can only move forward.

“One door closing has opened-up an opportunity to ride a horse for my step-dad and I’m grateful for that.”

Shinn will partner the Lee and Shannon Hope-trained Fenway for the 2000 metre feature. The filly has been set for the Vinery and later the Australian Oaks, where it currently sits at $17 with Sportsbet.com.au.

“She’s a three-quarter sister to More Joyous, she has been right on the heels of the top class fillies down here [Victoria] and we haven’t had her fully wound-up yet,” co-trainer Shannon Hope said.

Shinn lost the ride on First Seal after sitting three-wide throughout the trip last Saturday, but Hope is more than happy to have Shinn in the saddle ahead of the $400,000 race.

“Getting Blake is a huge bonus. He’s hard to get.

“He’s ridden about 85 winners for us so far and he has a goal to get to 100. Hopefully this filly can add a couple to that tally.

“He’s very family orientated. He has a great strike-rate for us. We couldn’t be happier to get him aboard.”

Shinn immediately received numerous offers after the news broke that he lost the ride to James McDonald, but the in-form jockey opted to ride for the family.

“I did have other offers, but family comes first in this case,” Shinn said. “She’ll be a chance in the Vinery and a great chance in the Oaks, so that is a Group 1 opportunity I wanted to grab.”

Star Tasmanian galloper The Cleaner has been given too much weight for the $350,000 Mornington Cup and trainer Mick Burles has opted to pull out of his plans.

“The news wasn’t good,” Burles said. “He’ll get 61kg so I gave the Mornington Cup a miss pretty quick.”

Burles had hoped the front-runner would receive 59kg but handicappers disagreed, despite the fact it hasn’t won since winning the JRA Cup at Moonee Valley in September last year.

Burles will instead target the Group 3 Easter Cup at Caulfield a week later.

“He won’t get as much weight and it’s not as far as the Mornington Cup so it’s probably a better race for him overall.”

Burles reported that The Cleaner had recovered well from its run in the Australian Cup but would only need a couple of hard gallops before returning to Melbourne for the Easter Cup.

The Cleaner is currently at $67 chance for the 2015 Melbourne Cup at Flemington, but is at much shorter odds for the Cox Plate at $34 with Crownbet.com.au.

Current Cox Plate and Melbourne Cup favourite Protectionist hasn’t quite shown up in two starts this season but trainer Kris Lees is genuinely happy with its progress to date and expects significant improvement once the son of Monsun gets over more ground.