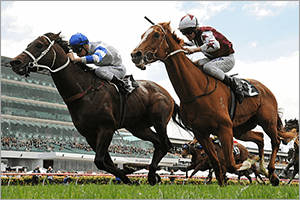 THE opening week of The Championships at Randwick has been run, albeit two days late, but there was action aplenty with Chris Waller and Glen Boss teaming up with Kermadec to win the Doncaster Handicap.

The racing community finally settled on which horse is Australia’s best sprinter and the pesky Kiwi’s also came to play in the Australian Derby, finishing first and third in the 2400-metre slog fest on the heavy track.

CupsBetting.com’s industry expert, Daryl Curnow, watched on keenly as the industry’s biggest names shared in the spoils at Randwick.

We’re just glad that Sydney finally got its weather right, the second time around.

If you’re yet to sign up at CrownBet – get involved today and take advantage of the bonuses on offer for week to of the Championships!

It was a New Zealand invasion in the Group 1 Australian Derby as Mongolian Khan fought resolutely to hold off challenges from Turnbull Stakes winner Hauraki and fellow Kiwi Volkstok’n’barrell, which was coming off a win in the Randwick Guineas.

The win gave trainer Murray Baker his third Australian Derby after the Cambridge-based trainer won with Nom Du Jeu in 2008 and again with champion [It’s A] Dundeel in 2013. Mongolian Khan also became the first horse since Bonecrusher to win the New Zealand and Australian Derby double.

“We always like coming here, it’s very good racing and they all get a show on the nice big track,” Baker said.

Punters treated the son of Holy Roman Emperor with caution early in the betting, installing the three-year-old on the fourth line of betting at $8, but after the rain came, punters jumped on and bet it into $5 nearing race time.

It was coming off a disappointing run in the Randwick Guineas over an unsuitable distance where it was beaten 6.25 lengths behind Volkstok’n’barrell, but the rise back up to 2400 metres was always going to suit the talented New Zealand stayer.

“I thought he was very disappointing in the Rosehill Guineas,” Baker said.

“In two weeks we’ve taught him how to swim and have done a few things with him just to keep his mind right.

“I thought he might be getting a bit tired, he’s had a long preparation, but we thought today he looked as good as he had at any other start.”

Mongolian Khan is a noted leader but jockey Opie Bosson positioned him behind the leader [Hampton Court] before losing his spot around the home turn. Bosson quickly switched back to the inside and the quality kicked in as it passed by Hauraki and Volkstok’n’barrell.

“He jumped, put himself in the race, and travelled beautifully throughout. He just loves that 2400 metres, he just keeps grinding all the way to the line,” Bosson said.

“He was relaxed. It didn’t matter where we were. It was just a matter of getting him into the clear.”

Mongolian Khan defeated Hauraki by 0.75 of a length with a further half-head back to Volkstok’n’barrell, but jockey Craig Williams was pleased with the effort from the Donna Logan-trained gelding.

“He’s done such a good job this preparation, but today [Monday] he found it too much for a staying test. For him to fight back was a great effort. He’s a really exciting horse,” Williams said.

As for Mongolian Khan, Baker has the Melbourne Spring carnival in mind later this year.

“I think he is a pretty handy horse, to win two Derbys is a pretty good effort,” Baker said.

“He’s been in a long time, he’s a bit of a hypo horse, he’s not the easiest to train but we’ve got there.

“He’ll go for a break now and then we’ll set him for a trip to Melbourne.”

Mongolian Khan has now firmed into favouritism for the 2015 Caulfield Cup at $13 with Sportsbet.com.au.

The disappointment of the race was Preferment which was the bookmakers favourite for most of the week leading up to the Australian Derby. The 2014 Victorian Derby winner never looked comfortable in the conditions and jockey Damien Oliver agreed post-race.

“He just couldn’t get traction on the ground,” Oliver said.

The best of the rest was 100/1 chance Bikila which ran a super race for fourth with Chad Schofield in the saddle.

“I was pleasantly surprised,” Schofield said. “He ran a great race for a 100-1 pop. He’s got staying ability.”

Chautauqua confirms itself as best sprinter in the land

Whether or not we can claim our sprinters as the best in the world is up for debate, but what we do know is that Chautauqua is currently the best 1200-metre sprinter in Australia.

The Hawkes’-trained runner secured its first Group 1 win in the T.J. Smith Stakes at Randwick for a stake worth $2.5 million.

The Group 1 was hyped as a race in three with rivals Terravista and defending champion Lankan Rupee, but only Lord of the Sky was able to provide a challenge to the four-year-old sprinting star.

Co-trainer Michael Hawkes offered his thoughts on whether or not he thinks Chautauqua is the best in the world.

“We all know who the best sprinter in the world is now, he is a super horse, has been knocking on the door and has been unlucky in his last couple of runs, you just have to have a bit of luck on the right day,” Hawkes said.

“Superstar horses do super things and you just can’t defy what he has done. He is just a superstar because horses just don’t do what he does, but he has gone up another cog and he could be anything.”

Jockey Tommy Berry found himself in an awkward position during the run, sitting last on the rails, but he was able to switch to the outside in the straight and the Encosta de Lago gelding sprinted quickly to grab a nose-margin win over the upset minded Lord of the Sky, which clearly relished the heavy conditions.

“It was a hard-run race,” Berry said.

“I didn’t see much happening in front of me, so I just bide my time.

Terravista has the best-backed runner in the field, opening at $4.20, but closing near $2.40 with some bookmakers, but could manage only third and Hugh Bowman provided no excuses.

“No excuses. Like to think we didn’t see the best of him today.”

The biggest disappointment was clearly Lankan Rupee, which finished ninth of 10 runners. The Mick Price-trained runner never looked comfortable and has seemed to have temporarily lost that toughness that made it a public favourite.

“Needs to go to the paddock and start again,” jockey Craig Newitt said.

The Gai Waterhouse-trained Sweet Idea was going to be a main rival, but was scratched on the morning. The recent Group 1 winner remains well-fancied in the market for the Group 1 Stradbroke Handicap in Brisbane this June – currently at $11 with WilliamHill.com.au.