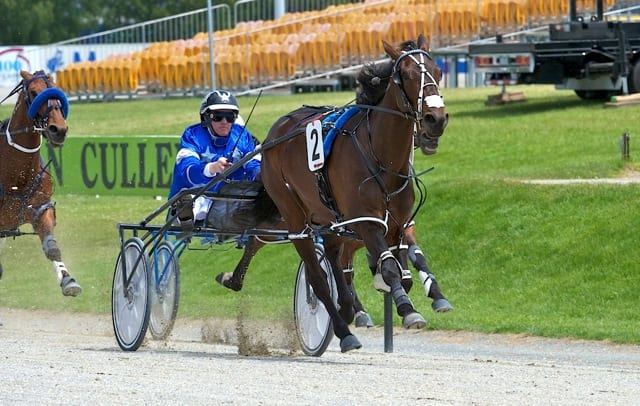 Champion Kiwi mare Adore Me has been has been retired after suffering a career ending injury in last Friday’s Auckland Trotting Cup at Alexandra Park.

The shocking news came just one week after the daughter of Bettors Delight and Scuse Me set the Australasian record for a mile by a pacer at Menangle, running 1:47.7 in taking out the Group 1 Ladyship Mile.

Adore Me attempted to back up at Alexandra Park on Friday night and put in a gallant effort to finish second, beaten a nose, after briefly galloping at the 450 mark. It was at that time that she is thought to have injured herself, with x-rays revealing a fractured sesamoid bone.

Co-trainer Max Purdon said that the injury is in no way life threatening, but unfortunately meant the end of her spectacular racing career.

Adore Me is regarded by many as the greatest female harness horse to have been produced in the Southern Hemisphere.

The brown mare, foaled in 2009, smashed the work record for the 3200 metre standing start last November when she took out the most prestigious race in New Zealand, the Group 1 New Zealand Cup at Addington.

She was also New Zealand’s champion three and four-year-old over the last two seasons.

Adore Me ends her career with 36 starts for 26 wins and seven minor placings with over $1.6 million in prize money earnings, including 12 Group 1 victories.

She will be put in foal later this year, however a sire is yet to be confirmed.

You can bet on the harness racing and get fantastic odds at BetEasy.com.au