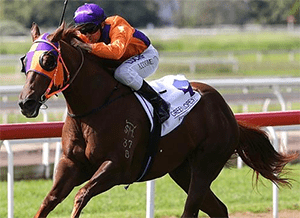 OUR friends at Sportsbet have released a market for the upcoming Doomben 10,000 and Stradbroke Handicap.

The two Group 1’s are the featured races of the Brisbane winter carnival, with the Doomben 10,000 kicking off this Saturday at 3:57pm AEST.

After drawing barrier five in the Doomben 10,000, the Ciaron Maher-trained Srikandi as moved into favouritism at $6, and it will be looking to improve on a disappointing last-start eighth in the Group 1 BTC Cup.

It is $8 to win the Stradbroke Handicap on June 6, which makes the $26 available at Sportsbet.com.au for the double very good value. That means that if Srikandi wins the Doomben 10,000, the odds will likely drop to around $5-6, but you would have already locked in $26.

Second favourite for the double is Our Boy Malachi which has drawn wide for the 10,000, but co-trainer Michael Hawkes believes it has what it takes to win a Group 1.

The “Rockhampton Rocket” is on the second line of betting for this Saturday’s feature at $7 at CrownBet.com.au, but is easier in the Stradbroke market at $10.

Its double odds are $36 which is good money and there is the possibility for insurance if Our Boy Malachi wins the Doomben 10,000.

Rock Sturdy and Knoydart both come from good stables and the extra distance in the Doomben 10,000 will suit both runners.

Knoydart is continually running on without winning and stepping up in distance from 1200 metres to 1350 metres will suit the son of More Than Ready.

Joseph Pride is having a great run with his sprinters and he lines up the talented Rock Sturdy.

The four-year-old finished second behind Charlie Boy in the Group 3 BRC Sprint last start and its form is good enough to compete in Queensland.

The son of Fastnet Rock has won four from 13 with six placings, including a win in the Group 2 Shannon Stakes at Rosehill.

Both Knoydart and Rock Study are in double figures to win both races, but are paying a very juicy $71 at Sportsbet.com.au for the 10,000/Stradbroke double.