Auckland Cup could prove a good guide into 2015 Melbourne Cup 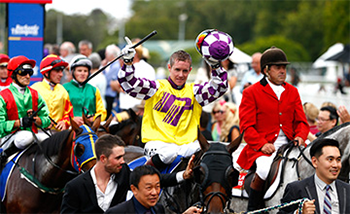 The Auckland Cup was run in New Zealand yesterday and the form out of the 3200-metre feature race could prove telling come the Melbourne Spring Carnival this year.

The Tony Pike-trained Rock Diva came from last to score a narrow victory over the well fancied King Kamada ($8), followed by Melbourne Cup nominated Ponderosa Miss ($7) which has come back from a career threatening injury and looks Flemington bound in November.

Rock Diva closed as the $4.50 favourite at WilliamHill.com.au and it is set to become yet another Tony Pike runner (Sacred Falls, Sacred Star) to make its mark in Australia.

“We’ve had this race in the back of our minds for a long time and wanted to get her in with a light weight,” Pike said. “That’s why we started in the Dunstan Final here on New Year’s Day instead of the City of Auckland Cup to save getting a penalty.”

“She slipped in on 52 [kg] and we knew she was ready to fire for a big race, but the wide draw dented our confidence a bit. I just left it up to Mark [Du Plessis] after telling him to go back and save her up.”

Rock Diva was only a two-win mare prior to the race but the half-sister to Australian Guineas and Derby winner Shamrocker was simply too good for them in the closing stages.

“She’s always shown us plenty and we knew she had a good win in her. I’m really rapt for her, she deserved this.”

Rock Diva is yet to be nominated for the 2015 Melbourne Cup, but place-getter Ponderosa Miss has and currently stands as a $67 chance with Sportsbet.com.au.

Racing NSW Handicappers have issue a 1kg penalty to the John O’Shea-trained It’s Somewhat for the 2015 Doncaster Mile at Randwick.

The imported gelding for Godolphin made a fantastic start to racing in Australia by winning the Group 3 Liverpool City Cup as a $6.50 chance after opening as high as $21 at BetEasy.com.au.

The gelding was originally handicapped at 50.5kg but it’s still likely to head to the $3 million handicap over 1600 metres at Randwick during The Championships.

Stablemate, and Melbourne Cup hopeful Contributer ($34 at WilliamHill), is exempt from the Doncaster Mile ballot after winning the Group 1 Chipping Norton Stakes.

Contributer is another import for Godolphin with its eyes set on the Group 1 Melbourne Cup this spring at Flemington. It sits on the sixth line of betting along with Red Cadeaux, Tom Melbourne, The Offer and the Donna Logan-trained Rising Romance.

Markets for the Doncaster this April are available at all our recommended bookmakers.

“Hong Kong Captain is the best backed runner,” said Sportsbet.com.au’s Shaun Anderson. “For some reason punters are not warming to Kermadec, but that could change as the race gets closer.”

Alpine Eagle ($6 at Sportsbet.com.au) was an impressive winner at Caulfield last Saturday and it looked as though the extra distance for this would suit nicely.

A new jockey had to be found for last start winner Wandjina after regular rider Damien Oliver was unable to escape suspension. The Gai Waterhouse-trained colt will now be ridden by top international rider Brett Prebble and is currently paying $8.50 after opening as low as $8.