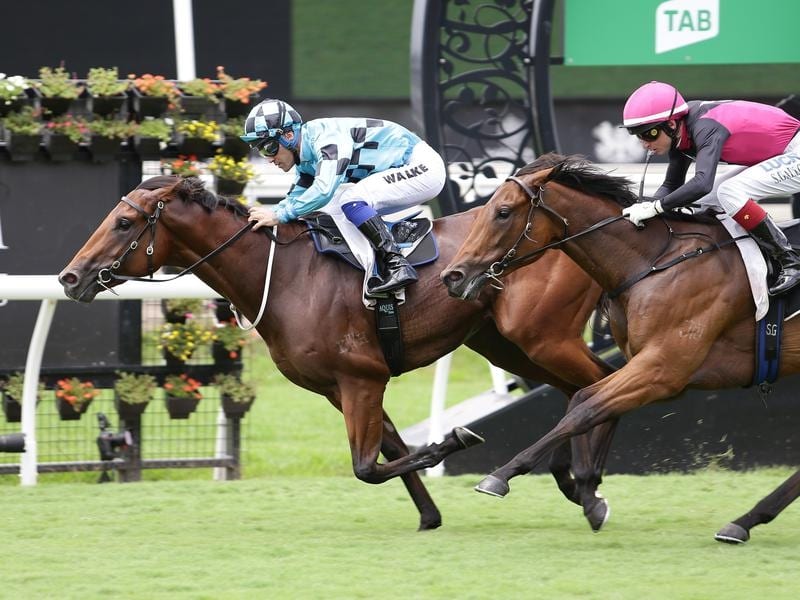 Ciaron Maher is considering adding blinkers to the gear of Dubious as he chases victory in the Golden Slipper at Rosehill.

Maher, who trains in partnership with Dave Eustace, said the two-year-old was likely to wear the headgear in a gallop on Tuesday after which he will decide whether he will race in them in the Group One race for two-year-olds on Saturday.

The likelihood of a wet Slipper may be the deciding factor.

“He’s pretty focused but if they can give him an extra half-length, that little one per cent, that’s what we’re looking for,” Maher said.

“And if it’s wet and you’re travelling through the ground, it usually holds you in better stead than if you’re floundering.”

Dubious has been consistent, winning at Randwick and Eagle Farm before running second to Slipper opponent Exhilarates in the Magic Millions 2YO Classic in January.

He has since finished third to Slipper favourite Yes Yes Yes in the Todman Stakes at Randwick on March 9.

“The other day the other horse quickened and we quickened after it but I thought he closed off very well.”

Stablemate Loving Gaby, to be ridden by Oisin Murphy, has snuck into the field after Godolphin announced it would not be paying a late entry fee for Athiri.

Loving Gaby won on debut at Caulfield before running sixth in the Blue Diamond Stakes and has since won a Randwick barrier trial.

“She’s a big, raw filly but not fully rounded yet as a racehorse but is getting there and she does have that X-factor,” Maher said.

“Dubious is by Not A Single Doubt and the breed usually handle it, but fitness counts for a lot,” Maher said.

“I’m happy with where he’s at and if it did throw up a track like last Saturday, I wouldn’t be concerned.

“Loving Gaby got a little taste of it at Randwick and seemed to handle it OK.

“I’d be reasonably confident with both of them handling it.”