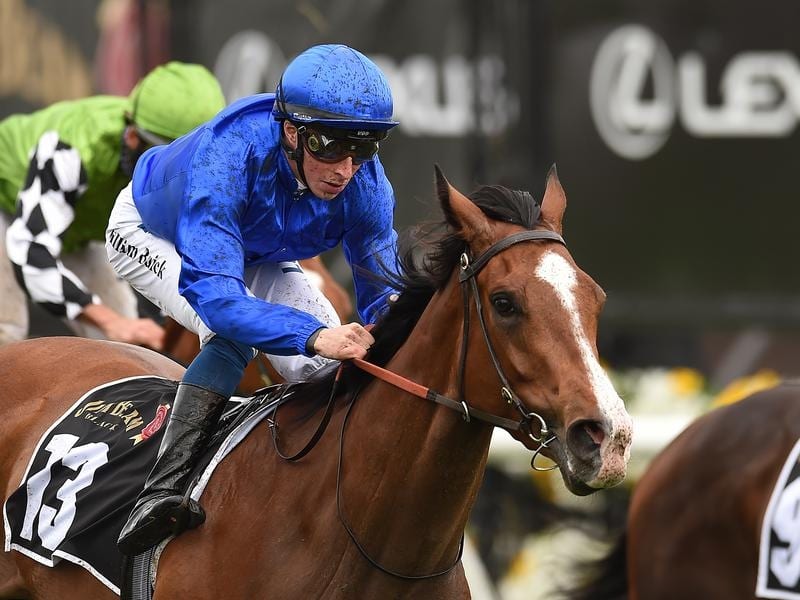 Godolphin-owned filly Pohutukawa has shown her class with a dominant win in the Group Three Kembla Grange Classic.

Pohutukawa was sent out the $1.65 favourite in Friday’s 1600m-race for three-year-old fillies after finding traffic problems at crucial stages in the straight in her previous two starts when third in the Light Fingers Stakes and fifth in the Surround Stakes.

Stepping up to the distance for the first time, Pohutukawa covered ground and made a sustained run under jockey James McDonald to defeat Frankely Awesome by 1-1/4-lengths with another half-length to Scarlet Dream third.

“It is really what we wanted to see from her today,” trainer James Cummings told Sky Thoroughbred Central.

“She’s a filly with a great action. A wonderful temperament.”

Cummings was pleased to see Pohutukawa get clear running and show what she could do after her previous two starts.

“Stepping up to a mile now, she was just too strong,” he said.

“This is a critical race that flows into the Vinery Stud Stakes over 2000 metres at Group One level. And back to set weights she will be beautifully suited there.”

The Vinery is at Rosehill on March 30.

McDonald was taken by the performance and said Pohutukawa would have no problems running a strong 2000m against her own age.

“She is a beautiful filly going forward,” McDonald said.

“I loved her stamina. She had to make a decent run today and it wasn’t easy on her. And she was just as strong on the line as she was at the 600 (metres).

“It was very impressive and I just love the way she relaxes and just copes with everything.”

Pohutukawa brought up the fourth winner for Cummings and McDonald on the eight-race program.